The first antibiotic, penicillin, became widely available in 1940. Antibiotics have since become a popular weapon in the medical arsenal against disease. Over one-third of all hospital patients are given antibiotics and each year in excess of 240 million antibiotic prescriptions are dispensed in the United States. Although no one can dispute that antibiotics have a place and a purpose, especially in emergency and lifesaving situations, a growing number of doctors and medical researchers contend that antibiotics have been grossly overused and abused, and, as a result, produce adverse reactions as well as strains of bacteria that have become resistant to antibiotics. 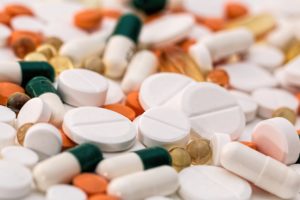 We’re at the point where the antibiotic cupboard is almost bare. We are victims of our own blindness. We have been taking too many of them and new, deadlier organisms, like the powerful drug-resistant tuberculosis strain, have been emerging as a result.” -Jeffrey A. Fisher, M.D. The Plague Makers

There are patients in hospitals that have bacterial infections against which no antibiotics are effective. This is only fifty years after antibiotics were introduced. Until around 1975, almost every care of gonorrhea was treatable with penicillin. Today, in places like Thailand and the Philippines, 90% of all cases are penicillin-resistant. In the U.S, it is above fifty percent. 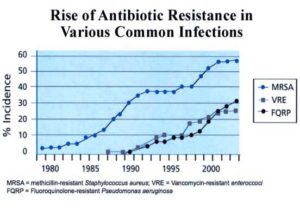 Nearly every disease known to medicine has become resistant to at least one antibiotic and several are immune to more than one. One of the MOST alarming things about the cholera epidemic, which has killed as many as 50,000 people in Rwanda, is that it involves a strain of bacterium which cannot be treated with standard antibiotics. Tuberculosis, too, has learned how to outwit doctors. Tuberculosis is an unusually tough microbe. Several strains of TB have emerged in the U.S. that cannot be treated with common antibiotics. Even infections such as staph and strep have become harder to treat as they have acquired resistance to standard antibiotics. One strain of hospital-dwelling staph can now be treated only with a single antibiotic and public health officials have no doubt that it will soon become immune to that one as well. Hospitals could become dangerous places to go and even more so if strep develops universal resistance.

AP: Doctors wrote 12 million antibiotic prescriptions in a single year for colds, bronchitis and other respiratory infections against which drugs are almost always useless, a study found. Such indiscriminate use of antibiotics has contributed to the emergence of drug-resistant bacteria, a growing problem in the United States.

The War on Bacteria

Bacteria, one of the smallest and most plentiful life forms on Earth, thrive successfully in the most inhospitable places and quickly adapt to new conditions in order to survive. We commonly assume that these tiny animals are evil little beasts out to destroy higher forms of life. In fact, all they are trying to do is survive and reproduce, just as humans do.

Bacterial drug resistance is a matter of natural adaptation. The longer a bacterium is exposed to a given drug, the more likely it is to develop universal resistance. Bacteria pull out all of the stops in order to resist drugs. They may release special enzymes that render a drug impotent or change their outer membrane that a drug cannot gain entrance. They can even alter their internal structures so that they are no longer susceptible to the drug. 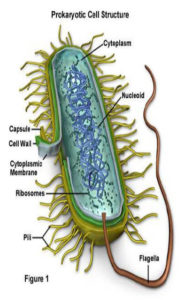 Bacteria are generally classified into three groups based on their shape. They are described as spherical (coccus), rodlike (bacillus), or spiral or corkscrew (spirochete [pronounced SPY-ruh-keet] or spirilla). Some bacteria also have a shape like that of a comma and are known as vibrio.

Bacteria most commonly reproduce by fission, the process by which a single cell divides to produce two new cells. The process of fission may take anywhere from 15 minutes to 16 hours, depending on the type of bacterium.

A number of factors influence the rate at which bacterial growth occurs, the most important of which are moisture, temperature, and ph.

Most bacteria require a pH of 6.7 to 7.5 (slightly more or less acidic than pure water). Other bacteria, however, can survive at a pH more severe than that of battery acid. 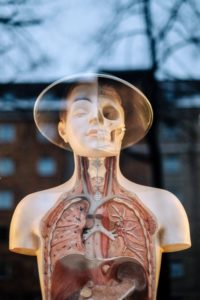 Many people go to their doctors and request antibiotics when they have a cold. Antibiotics have no effect on the vast majority of colds that are viral in nature and toxic side effects often occur.

Taking antibiotics for colds are is not only dangerous, but also a tremendous waste of time and financial resources, a fact that has been repeated by many leading scientists and health care authorities.

Antibiotics are still being prescribed widely to treat the common cold, despite evidence that they are completely ineffective against colds and flu viruses. Such indiscriminate use of antibiotics has created a serious problem involving bacteria that are resistant to antibiotics.

The livestock industry is a major source of the antibiotic overuse that has led to bacterial resistance. IT ALONE PURCHASES OVER ONE-HALF OF ALL ANTIBIOTICS SOLD. The drugs are incorporated into feed in order to kill bacteria that stunt the growth of animals. However, this gives resistant bacteria the opportunity to develop and multiply. As a result, when you eat these animals, you become infected with the resistant strains. Cooking the meat will kill the bacteria, but the antibiotic remains in the flesh and is absorbed into your bloodstream when the meat is consumed. 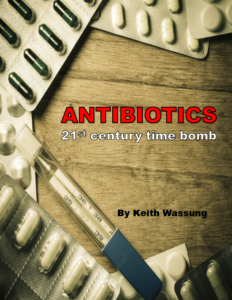