Teri Porter has been a part of Functional Chiropractic since early 2015 as part of the marketing and leadership team. She became office manager after her and Dr. Porter’s wedding in December 2015, and after their kiddos were born in 2018 and then 2022, Teri has taken more of a backstage role as CFO and social media manager. Her commitment and passion for chiropractic were born out of a passion for ballroom dance and the required level of fitness, health, and supporting the body to perform at its best. Teri enjoys dancing, training for and running Spartan races, and most importantly, homeschooling and hanging out with their son, Teddy, and daughter, Alexandria. Teri and Dr Porter also have a little YorkiePoo named Chewbacca. 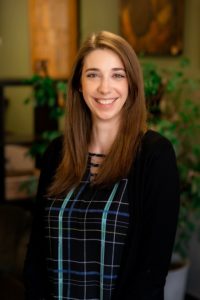 Bethany East is a Huntsville native and both of her parents grew up in the Rocket City. She has a Bachelor’s in Behavioral Science as well as a certificate in Child Advocacy. Bethany has been adamant about diet, nutrition, and holistic health since 2006 when she experienced relief from intense pain and fatigue that started in her early teens. Since becoming a member of our team, she has experienced the many benefits of upper cervical adjustments, with the most obvious being the improvement in her immune and respiratory system function. In her spare time, Bethany can be found cooking with her family, snuggling up with a good book, working on a sewing project, or spending quality time outdoors with her two sons and husband. 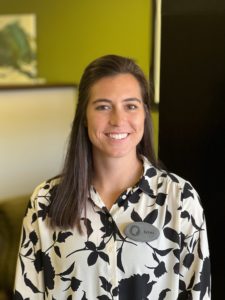 Jaymi has lived in Huntsville for a couple years after moving to Alabama from Illinois. She graduated college from Eastern Illinois University with a degree in Foreign Languages. Having been an athlete all of her childhood and competing in college as a pole vaulter, fitness and health have been not only an interest but a priority. She is a NASM Certified Personal Trainer, CrossFit Level 1 Trainer, and a Certified Physical Preparation Specialist. Chiropractic care became an integral part of her lifestyle and training to feel and function her best physically and mentally. She holds firm that all systems of the body, including the muscular, depend on the optimal function of the nervous system which chiropractic care provides. She enjoys encouraging others to nourish their bodies with proper nutrition and fitness that promotes a holistic and sustainable lifestyle. Jaymi spends her free time CrossFitting with her husband, chasing her nieces around, and looking for any reason to buy an iced coffee. 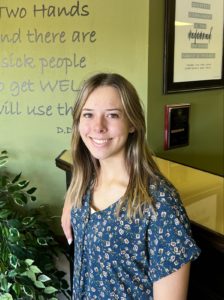 Kristen Pittner is originally from Crestview, Florida and moved to Huntsville, Alabama in 2014. She is currently a high school senior and participates in Track & Field and Cross Country. She grew up with a love for running and keeping her health at an optimal level. Kristen began her love for chiropractic care through her mother, who brought her to see Dr. Porter after a jaw injury. After her adjustment, she realized her body felt less strained, as the nerve interferences were being tended to, and kept returning for more adjustments. She joined the team in June 2022 and learned the intricate details of the benefits of chiropractic care for the nervous system. Fitness is very important to Kristen, and she believes that the body must be strengthened and healthy. In her free time, Kristen enjoys hiking, reading, working out, and spending time with friends and family.

Originally from Hamilton, AL, Colby received his Bachelor’s of Science from the University of North Alabama and is currently doing his residency through Life University here at our office.
When he is out of the office, Colby enjoys spending time with his wife, Casey, and their four legged fur baby, Millie. He also enjoys camping, hiking, and spending quality time with friends and family.